HEADING: WHAT DO WE KNOW ABOUT…

Too old to work?

This document is destined for the exclusive use of and cannot be used for any other purpose or distributed to third parties. All rights reserved, Global-Watch ®

“It’s an art to contemplate what the years bring us rather than what they deprive us of.” If André Gide had written this in 2019, it would still be relevant. In an age when employees in industrialized countries have longer careers than those in previous generations, and in a context of labour force instability and shortage, organizations have every interest to adopt human resource management practices that encourage the retention of older workers.

Zaniboni et al. (2019) examined the effects of age-related stereotypes (ageism) on the process of hiring older workers in order to reflect on practical implications to avoid falling into the trap of discrimination, whether conscious (explicit stereotypes) or unconscious (implicit stereotypes).

This initiative was made possible through a collaboration with the Université de Sherbrooke.

WHAT DO WE MEAN BY: 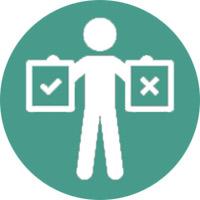 This is a form of ageism that an individual engages in consciously through their thoughts, feelings and actions towards older people.

For example, a recruiter may think that older applicants will perform less well at work and could consider them less fit for the position than young applicants.

This is a form of ageism that a person engages in without conscious awareness or control; it occurs automatically.

For example, in a selection process, a recruiter who has unconscious preferences for younger workers may engage in nonverbal communication (interpersonal distance, for example) that makes an older applicant feel less comfortable during the job interview..

Zaniboni, S., Kmicinska, M., Truxillo, D. M., Kahn, K., Paladino, M. P., & Fraccaroli, F. (2019). Will you still hire me when I am over 50? The effects of implicit and explicit age stereotyping on resume evaluations. European Journal of Work and Organizational Psychology, 1-15.

A two-phased laboratory experiment was conducted to test the study’s hypotheses. All measures and conditions were administered via computers and chosen on the basis of two pilot studies previously carried out by the researchers.

When the task was completed, as a manipulation check, participants were asked to evaluate how many of the applicants were under the age of 50 and how many were 50 and over.

What do the results of the study tell us?

Explicit and implicit age-related stereotypes have a negative impact on the process of hiring older workers, but in different ways.

What can organizations do?

This section presents actions on the organizational level that will guide managers in their thinking.

Age should not have an effect on human resource management practices.

Develop human resource management practices whose goal is to include marginalized workers such as older workers.

Comments from our expert

This study is set in a context typical of most industrialized countries, namely, the ageing of the workforce and the need to retain older workers and maintain their health.

In such a context, the presence of age stereotypes can have a negative impact on the process of hiring applicants aged 50 and over, as well as on other human resource management practices that could discriminate against them once they are hired, such as access to continued training and career advancement. Conversely, an organization that has a nondiscriminatory culture regarding age can contribute to the psychological health of older workers and encourage their retention.

Older workers are more inclined to extend their professional careers if they feel they are working for an organization that seeks to include marginalized workers such as older workers, women or immigrants by, for example, fairly distributing rewards and promotions.

TO CITE THIS GLOBAL-WATCH SCIENTIFIC INTERPRETATION

TO CITE THE ORIGINAL ARTICLE BY THE AUTHORS OF THE STUDY

Zaniboni, S., Kmicinska, M., Truxillo, D. M., Kahn, K., Paladino, M. P., & Fraccaroli, F. (2019). Will you still hire me when I am over 50? The effects of implicit and explicit age stereotyping on resume evaluations. European Journal of Work and Organizational Psychology, 1-15.